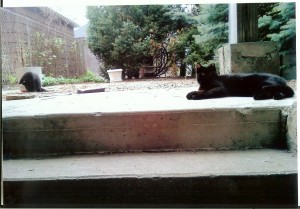 Last week my associate and I were walking home from an early evening dog walk in Rogers Park.  We watched as a man tied up these two beautiful dogs outside a restaurant, and he went in to get his food.  I started thinking about how I did this with my dogs eighteen years ago, in the same neighborhood, before I knew about the potential dangers.  I always rationalized tying up my dogs outside a store, thinking about how I could walk my dogs and run errands at the same time, and also because one of my dogs would never let a stranger come up and pet him, or try to take him.  And that he would protect my other more gentle and sweet dog, who would have gone home with anyone, especially if that person had food.  In all the years since I used to tie up my dogs outside a store, I have learned so much about the city I live in, my neighborhood, being a responsible animal guardian, Class B dealers, dog fighting, and maybe a little more about people.  So let’s start with all the things that could go wrong in just a few minutes if you have left your dog or dogs tied up outside a store.  First, anyone can take your dog.  If your dog is friendly towards strangers, then the risk increases.  If your dog is not friendly, it might be more difficult but not impossible if someone has a treat or a hamburger.  Not all dogs who are stolen will end up in a loving home.  Your dog could end up being used as a bait dog in a dog fighting operation, or trained as a fighter.  Class B dealers are licensed by the USDA to purchase and sell ‘random source’ animals to medical research, and these random source animals include companion animals like dogs and cats,  Other possible scenarios could include a person walking by your dog and petting your dog.  Even if your dog is friendly, are you sure that she won’t ever nip or bite someone?  What if the person is aggressive towards your dog, or teases your dog?  If your dog bites someone, and the police are called to the scene or the injured person reports the dog bite to a doctor or hospital, you will be issued a citation from the city.  Your dog will have to be quarantined and then assessed by a veterinarian.  Three citations and the city of Chicago will take your dog and have him or her euthanized.  What if your dog is startled and gets out of his collar or the leash breaks, then he runs into the street and gets hit by a car? I am sure there are more potentially horrible scenarios, but I don’t think listing them all is necessary.  I think it comes down to this reality— you are your dog’s guardian and you are ultimately responsible for your dog’s safety.  Your dog cannot know all the potential dangers in your community or all the things that could happen as you are inside getting your pizza or a cup of coffee.  You are also responsible to your community, and that means supervising your dog at all times, in a safe and legal manner.  Tying your dog up outside a store is not effective multi-tasking; it is a risk you should never take with your dog.

Some dogs have a difficult time during a thunderstorm.  I have been outside walking dogs during a storm, and it is not only dangerous due to the potential of getting struck by lightning, unpleasant as the dogs and I are getting soaked, and if a dog is terrified enough, he or she will pull desperately to get home.  Let’s say that you are 20 minutes from your home and the thunder and lightning is severe–seek shelter where you can, maybe under an awning of a business, or ask someone if you can shelter with your dog on a porch.  What about when you are inside and your dog is shaking and scared because of the thunder and lightning?  There are a number of options available and sometimes it is a matter of finding the one that works for your dog.  In the photo is Teddie, who is modeling a Thundershirt.  Teddie struggles during a storm–he shakes, pants and if the storm happens in the middle of the night, he cannot sleep and therefore his guardian, my associate Eddie, will not be sleeping either.  A Thundershirt can help with fear as soft containment is comforting to some animals; it is like a fabric hug.  Some cats hide during storms, under blankets, in boxes or under beds.  Again, it seems as if some kind of voluntary containment helps with fear during a storm.  And it makes sense as when you are outside in a severe storm,  being in the open without shelter, is a frightening experience–you feel terribly vulnerable.  What about other options to help your dog during a storm?  Some medications can help, whether allopathic or homeopathic/herbal.  One client had an older Lab who would become afraid before the storm, so they would give Jaxson two Benadryl.  If you have ever taken Benadryl you know how sleepy it can make you, and the same holds true for a dog.  Dogs can also take Valerian, which is a calming herb.  The best bet is to avoid taking your dog out during a storm, for your safety and the dog’s as well.  But sometimes we can’t wait for the rain to stop so we need to go out–and this is where a quick walk comes in.  And plenty of dog towels when you get back home. 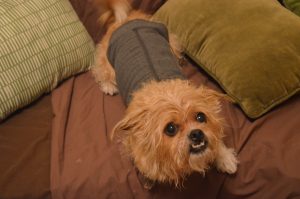 Welcome to WordPress. This is your first post. Edit or delete it, then start blogging!